Action Star-turned-California Governor Arnold Schwarzenegger arrived in the wee hours of the morning in Toronto at the historic Royal York Hotel, as part of his Canadian Tour which as so far seen stop-offs in Winnipeg and Calgary.

Schwarzenegger left the Hotel shortly after 11:00 AM with several Security Guards in tow before heading off to speak today at the Metro Convention Centre where some paid up to $900 CAN to hear him speak about his inspiring life journey. He gave an impromptu interview from us Escalade with Global Television and CHCH, before signing a few Autographs which he has been known in the past to do when the Cameras are on.
If today's Conference can be summed in two important tips, these would be "Don't be afraid to fail. You are a girlie-man if you are afraid of failure" and also "Work like hell" according to Schwarzenegger. Fair enough.
Audience members today included Rock Legend Gene Simmons of Kiss who is town for business reasons including a speaking engagement which took place at Sony Centre last night.  Schwarzenegger was spotted at a near-by Canadian Chain Second Cup grabbing a Coffee after his engagement today and is set to head to Montreal for his next stop-off.
Check out some more Photos I got of Schwarzenegger below: 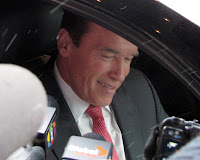 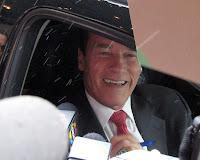 What does Schwarzenegger think about Toronto?  Watch below: