TIFF PRE-PARTY FOR PREMIERE OF SCORE: A HOCKEY MUSICAL 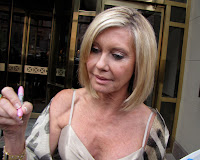 The cast of Score: A Hockey Musical did the rounds today prior to its two Gala presentations on TIFF 2010's opening night.  The cast members of Score arrived at the Intercontinental Hotel today for a pre-party and attendees included none other than the legendary Olivia Newton-John.  Newton-John who still looks vivacious, come out after the party to greet hoards of fans at the front of the Hotel along with her husband John Easterling, daughter Chloe and boyfriend.  Although she was in quite a rush to head off to the VISA Screening Room, she posed quickly for a photo with me and signed my Grease Soundtrack a total THREE (!) times as her pink Sharpie failed to show-up on the green of the album cover.

The film is about a boy who becomes a national Hockey hero and is directed by Mike McGowan who was last at TIFF with One Week in 2008.  McGowan of course was in attendance today with his wife and children, as were the film's star Noah Reid, the beautiful Allie MacDonald, Marc Jordan, Hawksley Workman and Hockey icon Theo Fleury.  Nelly Furtado also stars in the film, but was not present today at the festivities.  Score: A Hockey Musical opens in Canada on October 22, 2010 (my birthday!) via Mongrel Media.
Check out some more photos from earlier today: