Canada's sweetheart Rachel McAdams, as many of you are aware, is back in her hometown of Toronto shooting Michael Sucsy's The Vow. Although we've seen plenty of her handsome co-star Channing Tatum around town, McAdams has been pretty low-key. There have been only been a few Twitter reports of McAdams these past couple weeks riding her Bike through Yorkville, or going out for a stroll in Kensington Market.

I went by this evening to visit the set of The Vow in the city's Financial District, where they were taking advantage of the reduced traffic with it being Labour Day. McAdams looked absolutely gorgeous sporting a red-haired wig and a navy blue dress, heading back and forth between her Trailer and the Set. And thanks to a wonderful sweetheart on the Crew, I was lucky enough to chat with the talented actress and snap a photo together before she headed out for the day.
Upon being escorted under an Umbrella, she was all smiles coming over to greet a few young ladies also who were waiting earlier in the day and myself.  I gave McAdams a big hug and told her how proud I was of her and how much she's accomplished; graciously she accepted the compliment appearing genuinely touched and appreciative.   I did express my excitement to see her next projects: Morning Glory (opposite Diane Keaton and Harrison Ford) and Woody Allen's Midnight in Paris. The latter just wrapped-up a couple weeks ago and it seems she didn't get much of a breather between films. And of course, we both giggled about how much we love Allen, but she did whisper to me that unfortunately he'll only be here for a few hours this Sunday for his TIFF Gala for You Will Meet a Tall Dark Stranger. Could this possibly be a hint that we'll see McAdams there too?
The Crew was very specific about not allowing Photography on-set and kindly, I obliged. Also, all Actors are not permitted to be photographed in-costume and for our photo together, McAdams had first removed her Make-up and donned a Knit Cap over her beautiful pulled-back Blonde locks. She is still stunning even without the fixings! Understandably too, the Actors are not to be interrupted while on the way to the Set to not disrupt focus. Filming for The Vow wraps on my birthday, October 22, 2010. With filming going on around the city, perhaps you too will get a chance to catch a glimpse of its stars soon?
I did see an extremely-focussed Tatum heading in and out of his Trailer, conscientiously rehearsing his lines. He was sporting a pair of Camouflage shorts and a button-down shirt from his seemingly endless wardrobe of gray shirts.  My sources tell me that he even walked about shirtless this evening too!  Now where is that "Yes, Cameras" policy when you need it?
For you Channing Tatum and Rachel McAdams fans, I just may have an autograph or two to give away to two lucky readers who can prove their love for the two stars, oh say, maybe around my Birthday?   Why not celebrate two important events in one shot?  Can you handle it?   Yeah?!  Stay tuned.
Here's another candid of McAdams wrapping up her day: 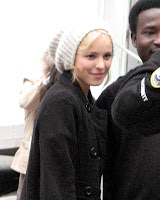