INTERVIEW: KERMIT THE FROG ON "THE MUPPETS"

"It's tough to work with someone you're close with and turning-on that magic on-screen." - Kermit the Frog, on maintaining a Romance on-and-off screen with Miss Piggy (October 2011)

Toronto gave a Hero's welcome to its favourite acting and singing Amphibian who returned to the same City where he filmed various Specials and The Jim Henson Hour throughout the '70s and '80s. Kermit the Frog flew in from Los Angeles, holding a Press Conference at his Yorkville Hotel in support of Disney's eagerly-awaited The Muppets. Also participating on the Press Tour is Actor/Executive Producer/Co-Writer Jason Segel, who many of us know as the Star of How I Met Your Mother and Forgetting Sarah Marshall.  With fond memories of the City, Kermit (who hasn't aged a day), tells a select group of Journalists moderated by Film Critic Richard Crouse, "It's great to be back".
Since being introduced to the World by Jim Henson in 1955, Kermit has captivated the hearts of Children and Adults around the World. In addition to being an internationally-recognized TV and Movie Star, he also is a noted Author who happens to have earned a U.S. Billboard Hot 100 hit with 1979's Rainbow Connection.
The upcoming Musical-Comedy from Flight of the Conchords Director James Bobin, centers around three Muppets Fans who visit Hollywood in search of their Idols only to learn of wealthy Tycoon Tex's (Chris Cooper) plans to destroy the historic Muppets Theater in order to access an Oil Reserve beneath it. Gary (Segel), Mary (Amy Adams) and Walter (voiced by Peter Linz) convince Kermit to gather The Muppets once again after many years apart, for a Reunion to raise money in an effort to save the Theater from its demise. 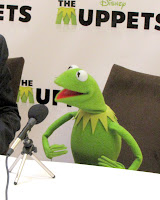 Many things have changed for Kermit over the years, but one thing which remains the same is the message which he and his fellow Muppets stand for. He says, "The Muppets are about coming together, which is important in this World.  It's important to be who we are.". "I'm not a great Singer. Miss Piggy is not a great Actress and Gonzo is  horrible at Stunts", he admits humbly.  "Together we're excellent failures".
One of the biggest hurdles which The Muppets face in this Movie - and perhaps in Real Life - is convincing a Network Executive  named Veronica (Rashida Jones) that they still are relevant enough to generate public interest. I asked Kermit how it felt to be questioned on their Legacy and he replies with confidence that both Parents and Kids alike have much to be excited about with this new venture.
Watch Kermit's testament to The Muppets' inter-generational appeal below:
Journalists were curious how Kermit manages to keep the Romance alive in an on-again/off-again relationship with Miss Piggy which has spanned many decades. He reveals that he starts tummy-first with her advising us, "I always keep Truffles in the Dressing Room".  On their actual relationship status, he only would comment "We're not married".
One thing which makes watching The Muppets so thrilling is its abundance of Celebrity Cameos. Whether it be Leslie Feist, Jack Black, Alan Arkin, Ken Jeong, Judd Hirsch, Emily Blunt or Selena Gomez, every demographic has a pleasant surprise in-store. Kermit credits this as being Segel's doing, telling us "He's got many famous friends who grew up watching The Muppets and they were happy to sign-on.". 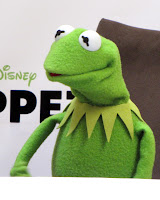 Despite all of his success Kermit admits, "I don't see myself as a big Star. I'm actually a lot quieter than the Kermit you see on-screen.".  Lunch - one of the things he looks forward to most during Filming - is one of the few things for which this avid Popcorn-eater makes specific demands. "I love Worms, Mosquitoes and have a hankering for Fried Chicken", he says. "No Pork or Pig products though.".  Obviously.
Before wrapping, Kermit had one final bit of advice for all of us,  saying "Always follow your dreams and trust yourself. That is the message of the Movie and what The Muppets are all about.". With Photographers gathering around him to snap Photos soon after, quirky Kermit joked, "Please don't shoot my nasty bits!".
The Muppets hits theatres everywhere on November 23, 2011 via Walt Disney Motion Pictures Canada.
See Photos of Jason Segel here in Toronto for The Muppets and learn how you can enter to win a Photo signed by him!