WILL ARNETT & AMY POEHLER IN TORONTO FOR THE HOLIDAYS | AUTOGRAPH GIVEAWAY

Toronto's v. own Funnyman Will Arnett brought the Family home for the Holidays, arriving just before Christmas Eve. And in case you forgot, his lovely Wife is none other than equally funny Emmy-nominated Amy Poehler, known best for her stellar work on NBC's Saturday Night Live. I spotted Arnett out on a Coffee Break at Starbucks in Yorkville, after watching over his two sons Archie and Abel, while Poehler was out doing a bit of shopping earlier.

Incredibly nice, I mentioned his hilarious Tweets on Twitter last night, chatting with Fans while appearing to be under the influence of a Molson or three. A big Fan of his work on Blades of Glory, 30 Rock, Arrested Development and latest Fox series Running Wilde, Arnett was appreciative of the praise and appears still to be the humble Toronto Boy he truly is at heart. Kindly, he posed for a Photo with some pouty lip action in full force.
Shortly after, Arnett and Poehler came down to their Hotel Lobby, waiting for their Driver to show-up. Adorable Archie could be seen sporting his Winter Coat through the window, sitting between Mom and Dad. Throwing a wave over to Poehler, she waved back - just as vivacious and animated as she appears on-screen. "Oh my God, you must be freezing!", she called out to me, gesturing to come closer. Poehler mentioned how much fun she had in the City just relaxing despite the bone-chilling temperatures. And at that moment Arnett signaled that their Driver was ready to go. Graciously, she thanked me for my support and posed for a quick Photo - all smiles. Doesn't she look sweet and lovely even with little Make-up?
Poehler is at work currently on NBC's Parks & Recreation and will be appearing vocally in 2011's Alvin & The Chipmunks 3-D, the next installment of the wildly successful animated Feature Film franchise. 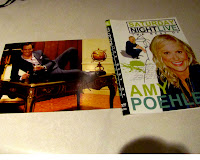 Both Arnett and Poehler signed a 5x7 Photo for one of my lucky readers. To qualify for the win, please leave a Comment why Will Arnett and Amy Poehler are the funniest Couple ever. One winner will be selected February 1, 2011 at random. All are welcome to enter. Good luck, Mavenati!
Follow Arnett on Twitter here
Follow Poehler on Twitter here
(Photo credit: Mr. Will-W.)
Posted by MR. WILL-W.:POP MAVEN at 5:23 PM