All hail The Queen!  The Queen Latifah flew in from Los Angeles earlier today to host the P&G Beauty & Grooming Awards 2010, honouring outstanding Editorial and Creative talent in Canada.  The event held at The Carlu, brought together the who's who of Beauty, Fashion, Art and Design together with a panel of Experts choosing 13 winners in total.

Playing host to an enthusiastic crowd, the Grammy, SAG and Golden Globe Award winner was oh-so-radiant, never without a smile and certainly without a lull.  Being the Face of CoverGirl Makeup, she admitted that her look could never be achieved without a team of Professionals and this evening was a tribute to those who dedicate themselves to the Art of Beauty. 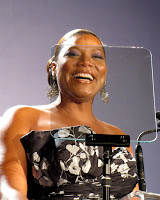 Presenters tonight included handsome Photographer Glen Baxter of Fashion Television, who couldn't help but be a little smitten with Queen Latifah, telling her "It's such an honour to share the stage with you tonight".  Chatting with effervescent Television Personality/Singer Jully Black earlier in the evening, she too expressed nothing but excitement at meeting Queen Latifah earlier in the day during a run-through of the Show.  Canadian Fashion Designer Shawn Hewson told me, "Queen Latifah is Queen Latifah.  She's just got this wall of greatness surrounding her."
Black, who was a Presenter tonight, brought the house down with her self-admittedly poor French, pronouncing the names of nominees and eventual winner of the Best Beauty of Fashion Blog (French) award with a knowing wink.  Even Queen Latifah had to ask the audience jokingly after, "Are you sure you still need me here?".


Watch the hilarity below: 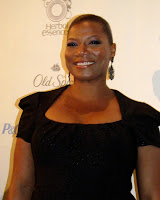 The Show tonight hit an emotional note when Blogger Lolitta Dandoy of Mode de rue (clindoeil.ca) making a v. shocking revelation upon acceptance of her award for Best Beauty or Fashion Blog (French).  The impossibly chic Dandoy told the audience that recently she was diagnosed with Breast Cancer, proudly sporting a Shaved Head.  She was met with a standing ovation from the audience as understandably, she teared up at her seat from all the love in the air.
Other notable winners tonight included Jean-François Légaré who competed against himself as a three-time nominee in the category of Best Fashion Feature: Magazine or Newspaper (French).  Elizabeth Cabral of Flare Magazine accepted her Best Fashion Editor of a Magazine award with low-key humility.  David Lackie of the National Post won for his piece Get Untied in the brand new category of Best Male Fashion Feature.  Lovely Model Frances Coombe also was  honoured as Best New Face; she smiled sweetly when I congratulated her at the Bar afterwards.
After the Show, Queen Latifah came out to pose for a Group Photo with tonight's Winners and luckily, she came over and posed with me for a Photo (as seen above).  Honour.  Thank you P&G and MSL for having me!  I cannot wait for among other things in my Goodie Bag, that Cold Stone Creamery Cake ....and of course, I will apply those Crest White Strips thereafter.
Check out some more photos from this evening below:
(Photo credit: Mr. Will-W.)
Posted by MR. WILL-W.:POP MAVEN at 1:13 AM