INTERVIEW: SARA BAREILLES | PHOTOS FROM TORONTO CONCERT AT THE PHOENIX

In less than three years, Sara Bareilles (pronounced Ba-rell-is) quickly has become a household name around the world with her brand of musical sunshine.  Her debut single Love Song was one of the biggest songs of 2008, garnering Grammy nominations for Best Pop Song and Best Female Pop Vocal Performance. It also reached number one on the Canadian Billboard Hot 100, U.S. Billboard Pop 100 and Hot Adult Contemporary Tracks Charts.  Not bad for a first try.
Now touring in support of her Billboard Hot 200 Chart-topping sophomore album Kaleidoscope Heart

, Bareilles made her fourth visit to Toronto today and sat down to chat with Mr. Will-W.:Pop Maven, also answering a few questions from readers.

Sara, thank you so much for making time to chat with us today. In addition to us being huge supporters of your Music, your label Sony Music has been equally supportive of us, offering our readers a chance to see you tonight at The Phoenix, in addition to a Giveaway of your new album.  Getting a chance to speak with you just takes the Cake. 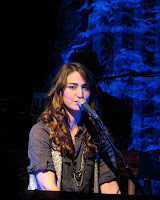 Mr. Will-W.: Back in April 2008, I saw you perform with your friends Saving Jane and Rachel Yamagata at The Opera House where I had the pleasure of meeting you. That was your first visit to the City and so much has progressed for you in two years' time. Looking back, did you ever anticipate this level of success?
Bareilles: No, I never imagined this would happen to me. I mean, I hoped and prayed for it to happen, but Love Song becoming the big hit that it did was completely out of my expectations. I've had the opportunity to see the World since then and I count my blessings every day.
Mr. Will-W.: The interesting thing about your Music is that it seems to be everywhere I turn, whether it be watching TV or when I'm at the Theatre watching Movie Trailers.  Your Music appears to be getting a lot of exposure outside of traditional mediums like Top 40 Radio, for example. Can you comment on the changing face of Music Marketing and where do you stand on this?
Bareilles: Well, as an Artist I find that I am always faced with an internal struggle. The Circle of Artists is hyper-aware of being criticized for "selling-out".  One thing we cannot deny is that the Marketing of Music is undergoing an evolution. I would consider using my Music to sell products where I see fit and I'm aware of the need for Placement and take no issue with it. I have embraced this with a "more is merrier" mentality and at the end of the day I let the audience decide whether or not my Music is something for them. 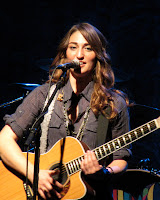 Mr. Will-W.: Sara, as a Music lover, what are your thoughts on Downloading? As an artist who tours regularly, do you find that your Music Sales are affected?
Bareilles: Much to the chagrin of my Record Label (Sony Music), I find the Internet very helpful and I've benefitted from from the exposure that comes from Downloading.  I myself am constantly checking out things my friends send me, whether it be virally through YouTube or through other means. We cannot underestimate the power of Fan Loyalty - they will support what they want to support. A perfect example of this is Radiohead's pay-what-you-can album In Rainbows. I thought that was wonderful and ground-breaking.
Mr. Will-W.: I agree wholeheartedly with you. When I discover new Music that I love, my first reaction is to share the goods with friends. At the end of the day, I have faith in them that they will support what they love, whether it be through Fan Merchandise or Concert Tickets. Out of curiousity, what is your creative process is like?
Bareilles: I definitely have a routine and I always start with Music first and Lyrics second. I do not work well in the studio with others to be honest, as I have to be alone.  My favourite moments take place first thing in the morning and that's when I find my inspiration.... with a pot of Coffee by my Piano. 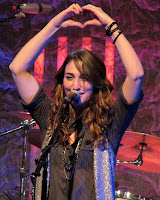 Mr. Will-W.: Yes, you can hear that in your Music as there's a certain Sunniness to it.  I was amazed to see that you opened for President Obama in October at the Midterm Elections in one of your favourite cities, Las Vegas.  Tell us all about that.
Bareilles: I am a huge Obama supporter. Actually I've performed for the President on a few occasions already and met him at the White House Easter Egg Roll, in addition to having Lunch with him at the G-20 Summit in Pittsburgh. It is a great honour to know him and Michelle.
Mr. Will-W.: One of my readers Yen, really enjoyed your collaboration with Weezer on Jimmy Kimmel. Are there any more "unlikely" collaborations we can expect from you in the near future? What else is coming down the pipes?
Bareilles: I'm not so sure I can answer that question. I mean I'm totally drawn to the unexpected and quirky. My collaboration with Weezer was my first time doing anything like that. I think it can work if done properly. I love Airplanes by B.o.B. featuring Hayley Williams from Paramore and feel that song featured her properly. I would definitely consider doing something like that.

Coming next is my video for second single Uncharted which I did in front of a Green Screen.  I have no idea how that's going to turn out but I trust my talented Director Laurent Brie as he did a wonderful job on my last Video, King of Anything. 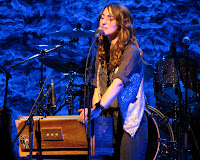 Mr. Will-W.: I believe that there's so many directions you could go with your voice - you're so versatile, Sara. Now for the fun stuff, name for me a couple guilty pleasures we'd never guess you're into.  I mean, you keep surprising us, whether it be your cover of Beyoncé's Single Ladies or your tribute to MTV's Jersey Shore.
Bareilles: (laughs) You'd never guess it but I'm so obsessed with A&E's Hoarders! It's so terribly upsetting but I can't stop watching! My friends also got me hooked HBO's Dexter recently so I'm still catching up on old DVDs now.
Mr. Will-W.: Tell us about Zach Galifianakis and his tie-in with King of Anything. Apparently you Blogged about that song being all about him?
Bareilles: I think I said that in a joking manner because I'm such a huge fan of his. I was trying to will that thought into existence, hoping that perhaps if I put it out there, the cosmic forces would bring him to me!  (laughs) 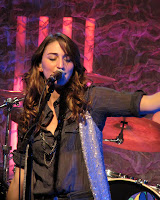 Mr. Will-W.: Funny!  You've been in Toronto a few times already. Are there any distinct memories here for you?
Bareilles: I really love Toronto and I mean it. It is one of the few places in the World where I can just walk on the street and not have to feel guarded. I remember my last time here in the Spring, when I just took a long walk, exploring the City, walking all the way from my Hotel to the CN Tower. People are so sweet and nice here; they smile. Although I don't remember the names of restaurants, the food is amazing here.
Thanks so much Sara for taking the time to chat with us as I know you have a lot of Press lined-up today. I wish you all the best with the Tour and Kaleidoscope Heart.

Photos featured in this Interview were taken from her energetic and intimate show later in the evening at The Phoenix.  Watch a clip of Bareilles performing King of Anything below (audio content owned by Sony Music):
(Photo credit: Mr. Will-W.)
Posted by MR. WILL-W.:POP MAVEN at 7:03 AM