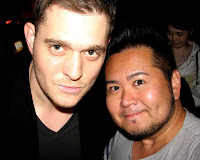 And that handsome guy to the left would be Canada's Darling Crooner Michael Bublé, returning from a wonderful time at Paul McCartney's Up and Coming Tour show at Air Canada Centre.  The two-time Grammy winner who hails from Burnaby, kept telling a group of us, "Guys, that show was amazing!  You have to go see it!". And it appears he was v. excited about the show, arriving in-town three days prior to his own back-to-back shows at the same venue later this week.

As expected, Bublé is genuine and a man of his word, coming over to greet me with his Security Guard as promised after I flagged him down.  He signed a couple autographs and took time to pose for a handful of photographs, despite having been reported denying some fans Photo Opportunities earlier today, when he was seen in Yorkville grabbing a late lunch at Subway.
Of course, I am super-stoked about seeing him in-concert later this week, as he puts on a good show consistently.  Review and photos will follow - check back Thursday!  In the meantime, you can fawn over that mesmerizing Brown Eyes below: 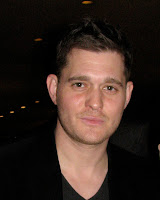 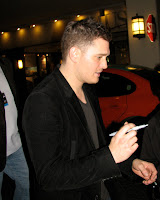 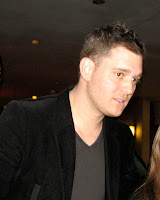 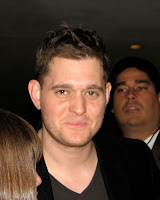