The Cast of Real Steel showed their true mettle, coming out to support their new Action/Fantasy Film from Walt Disney Motion Pictures Canada at Scotiabank Theatre. Stars Hugh Jackman, Kevin Durand, Dakota Goyo and Director Shawn Levy flew into the City to do a day of Press, followed by a Red Carpet appearance, where Media and Fans had lined the Theatre wall-to-wall.

As a true testament to their faith in the $80 million Blockbuster, the Cast and Director all sat through the Screening after having seen the Film already multiple times its Toronto-born Star, a 12 year-old Goyo tells me at the bustling After-party held in the Distillery.  He also tells me that he can be heard in next year's Animated Feature, Rise of the Guardians again alongside Jackman.
The thrilling Adaptation of the Short Story Steel takes place in 2020, when Robots have taken over Humans in the sport of Boxing.  Charlie (Jackman) is a former Boxer down on his luck, is reunited with his estranged Son, Max (Goyo).  The two are brought together by their love for Boxing and together they take an Underdog Robot named Atom and get him into fighting form in a match against the invincible Champion, Zeus.
Jackman tells me he is currently busy prepping for the Broadway debut of his wildly successful Hugh Jackman in Concert, which played this Summer at Princess of Wales Theatre in Toronto, making it a priority to visit the City to promote Real Steel.  Asking him how he finds time to balance being a Dad, a Husband and an Actor of Stage and Screen, he tells me looking  rather dapper in a form-fitting Suit, "I love the Movies, Man!  That's how I find the time!".
See this Video Clip below including some questions I asked on the Red Carpet: 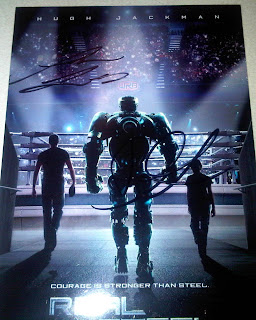 And here's where you get to be a part of the fun too!  Goyo and Levy were amazing enough to sign a Photo for my Readers and to qualify for the win, you must "like" Mr. Will-W.:Pop Maven on Facebook.  Under this Posting, you must answer the question: "What is the name of the Robot whom Max and Charlie train to fighting form in Real Steel?".  Your deadline is Monday, October 10, 2011.  Good luck, Mavenati!