SIR PAUL MCCARTNEY IN TORONTO FOR UP AND COMING TOUR 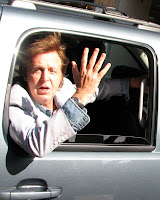 Sir Paul F*cking McCartney, people! Know your place!!! The former Beatle is in Toronto doing two sold-out shows at Air Canada Centre as part of his Up and Coming Tour - a rare visit marking only the tenth time he's toured as a solo act in Canada.

I can say it was a great honour to be only inches away from him as he rolled down the window of his SUV as he left his Hotel, telling fans he wouldn't be able to come out personally and greet a dozen fans, but still wished us all well. Furthermore, these photos I got of him are among the first to surface from his Toronto visit and you Mavenati, are in exclusive company!
McCartney is expected to perform a selection of material off his 2007 album Memory Almost Full, plus many of his earlier hits tonight. The Tour wraps up August 19th in Pittsburgh. 68 years-old and still on fire!  Hot!
Here's another pic below.  Can you handle it?! 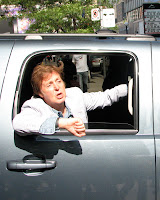