Although relatively obscure with North American audiences, Anil Kapoor is a screen legend in India and internationally among fans of Bollywood Cinema.  The 51 year-old Actor has been in Toronto the past few days doing Press for the upcoming International Indian Film Academy Awards celebrations, which will be taking place between June 23-25, 2011 here in the Greater Toronto Area.  Think Oscars - but Bollywood.

Recognized most in these parts for his performance in Danny Boyle's Slumdog Millionaire, which swept the Oscars in 2009 including the coveted Best Picture Award, Kapoor also appeared in the eighth season of popular series 24.
The upcoming festivities are expected to bring 40,000 visitors to Toronto and 600 million people around the world will be watching on Television.  Various Theatres around Toronto will be hosting Film Premieres also during the festivities.  Click here for more details.
Kapoor appeared calm and composed when spotted out and about in Toronto with his entourage earlier this evening.  While posing for Photos with a few Fans, oddly he looked every other way than the Camera in multiple Photos.  Luckily, he smiled when I asked for a Photo together, staring directly into the Camera and digging-in a bit to accommodate my height, or lack thereof.  A great honour.
This is a cause for celebration  as we continue to strengthen our Indo-Canadian relations.  As many of you may recall, Bollywood Star Akshay Kumar has produced a Hockey Film titled Breakaway, which filmed here last Fall starring the likes of Russell Peters, Drake, Ludacris, Rob Lowe, Camilla Belle and many more. You can bank on that getting the Gala treatment at TIFF 2011.
View some more Photos of Kapoor below: 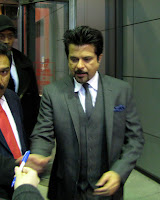 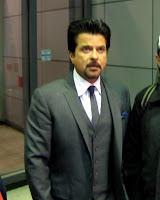 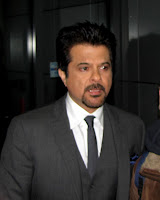