Canadian Boys do it best and Cory Monteith is no exception. Although it has been documented time and again that Glee's Cory Monteith is wonderful with Paparazzi and Fans alike, I did not expect him to be nearly as generous as he was this morning on his way to rehearsal for the Gemini Awards. The Show which takes place tonight at Toronto's Winter Garden Theatre, honours the v. best in Canadian Television and Monteith plays Host to the festivities.

The strapping Calgary-born Actor cut his teeth working on Canadian-filmed productions like Smallville, Supernatural and Stargate before reaching mega-stardom eventually on Fox's Musical Comedy series Glee. Monteith who plays Football Jock-turned-Show Choir Boy Finn on the wildly popular series, admits to being awkward and one could sense that bit of shyness as he came out of his Escalade today to greet a lucky group of ten Fans, signing autographs and taking Photos. His Publicist and Security Guard stood back and watched-on supportively. And of the many Celebrities I've met in my life, I'd have to say if not the nicest, Monteith is definitely in my Top Three.
Don't forget to tune into Global and Showcase tonight as the Awards will be televised nationally from 8-9:30 PM EST.
Monteith was ever-so-amazing to pose for a Photo with me, signing my various Glee memorabilia. As always, I love my readers and want you guys to have one of the signed 5x7 photos he personalized! If you're in it to win it, please leave a Comment below detailing for me why it is that you love Cory Monteith (maybe even more than I do!). A winner will be picked December 23, 2010 as a Christmas Gift to one lucky member of my Mavenati, so please leave me some form of contact so I can let you know if you're the chosen one!

In the meantime, let's all fawn over these Photos of him together: 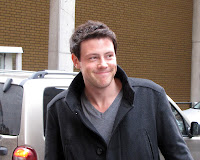 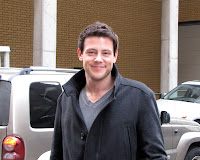 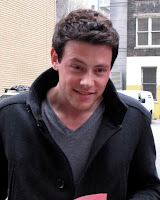 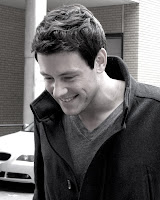