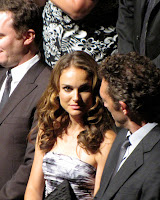 Crazy people and Ballet - what a perfect match.  Darren Aronofsky (The Wrestler) has directed possibly another masterpiece in Black Swan and judging by the warm round of applause from an at-capacity Roy Thomson Hall  tonight it received, it appears many would agree.  The edgy Thriller however, is entirely dependent on a demanding performance from its star Natalie Portman as Nina. After watching this film, one can only wonder if there are any limits to her versatility.

Nina is chosen to play the dual role of White Swan/Black Swan by the Artistic Director of her Company, the inappropriate Thomas (Vincent Cassel).   Having grown up under the uncomfortably close watch of her mother (Barbara Hershey), Nina is not without her share of insecurities and this manifests itself through strange and self-mutilating habits.  She is driven at her craft to the point of obsession, yet somewhat naive about the world.  It is because of this that Thomas doubts whether or not she is capable of playing the role of Black Swan due to her inability to fully "lose herself" and "transcend".
A new Ballerina is introduced in Lily (Mila Kunis), and soon Nina becomes suspicious of her intentions, feeling threatened that she just may lose her coveted opportunity to her new rival.  Lily is a perfect contrast to Nina - dark, fearless and seductive.  Tensions mount at home for Nina as her mother resents that she will eventually lose control over her daughter because of her oppressive regime.  And oddly there is a lingering sense of sexual tension also as Thomas and Lily both awaken sexual feelings in her.
Aronofsky is a master of Tension and the film half-way through, reaches a dream-like state where the audience begins to question whether or not Nina actually is sane or really a victim to some cruel Ballerina sabotage.  And perhaps this is better left unknown.  The story itself here parallels the tale of Swan Lake and Nina becomes the metaphoric White Swan who dies after coming to the full realization that her leading role is indeed in jeopardy at the hands of her rival.  A fire is ignited within her as she crosses over to the dark side, fully embodying the Black Swan nobody thought she could become.
It is safe to say that Natalie Portman is undeniable here and she has never been closer to that Oscar. I'd watch this gorgeous piece of Cinema after it hits theatres December 1, 2010 via Fox Searchlight.  Grade: A+
View more photos of tonight's TIFF Gala below:
(Photo credit: Mr. Will-W.)
Posted by MR. WILL-W.:POP MAVEN at 3:00 AM