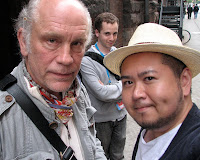 It was an absolute honour in the highest regard to meet John Malkovich today prior to his L'Oreal Luminato Festival presentation of The Infernal Comedy at Massey Hall.  Arriving with a shot of Espresso in hand, Malkovich stopped for a moment to pose for a photograph with me.  When I asked him for his permission to pose for a picture, I stated "You probably don't want to do this, but I'd be greatly appreciative", to which he replied jokingly "You're right, it is torture,  but if it makes you happy, I'll do it" and he obliged anyway.  He even graciously offered me an autograph which I didn't expect as he is notoriously reluctant in giving those out.  But keep in mind that Malkovich won't just sign anything.  He is very particular in what he signs and reportedly will not sign DVDs or photos of himself anymore.  So he signed my Ticket Stub, which I will frame.

The twice Oscar nominated actor honed his craft at Illinois State University as a Theatre Major, so the transition back to the stage was no big surprise after having appeared in over 70 films these past 25 years.  Although I didn't particularly enjoy The Infernal Comedy or find it engaging, Malkovich's role was indeed challenging as a Serial Murderer/Rapist in that he had the daunting task of making us understand someone so despicable.  And he did as well as one could without a real story or structure.  He improvised many parts to cater to local tastes, including a Prologue where he thanked us for coming out in the rain despite the play's scheduling conflict with Woofstock (an annual festival for Dogs in Toronto).
The play is based on the true story Jack Unterweger, an Austrian man convicted and sentenced to 15 years in prison for his crimes.  Thereafter he fled to the United States, miraculously escaping convictions there despite his well-known past, murdering and sexually assaulting more women.  The story is told from Purgatory where his character has written an Autobiography full of lies.  He is unable and unwilling to tell us the truth of whether or not he did commit his crimes as this remains a part of his legacy and reason for notoriety.
Although I'm far from being closed-minded, the play was not marketed as an Opera and a great majority of the play is filled with melodramatic numbers sung by two Sopranos who depict the many women in Unterweger's life.  Through them we learn of his womanizing ways, violent tendancies and frequent obstruction of truth.  I can't comment on the quality performances as Opera is outside my realm, but I will say that The Infernal Comedy dragged on far too long without any real reward out of it all.  And the sentiments of the audience could be felt as whisperings of "I'm not sure what I thought about that" could be heard in the stairwell on the way out.  To learn more about the play, visit its official site here.
Enjoy these exclusive photos I got of Malkovich earlier today: 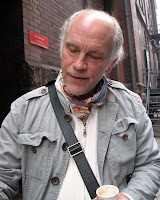 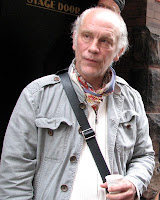 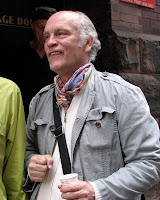 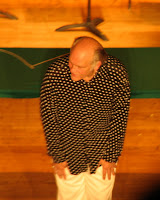