Who doesn't love Katy Perry? The sweetheart singer-songwriter arrived in Toronto Thursday and has been on a non-stop media blitz which will extend until next Wednesday, including a performance at the MuchMusic Video Awards on Sunday.  And I have a feeling by then Perry and I will practically be like roommates with the amount of times we'll be seeing each other!

I was lucky enough to get invited to a taping of eTalk Daily today, hosted by Ben Mulroney where she made him rather nervous after drawing attention to his Dressy Top and Pants, while going sans socks in a pair of Sperry Top-siders.  She mentioned that she felt a little more nervous than usual today.  During the half hour interview, Perry told audience members about how she met now fiancé Russell Brand (who by the way is not in town) at the MTV Video Music Awards where he took advantage of the celebrities on the Red Carpet, getting them to do faux interviews for his just-released hit comedy Get Him to The Greek.  Within moments they were making out (playfully) she claimed, and one thing led to another and the rest is Rock 'n' Roll history. 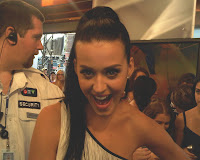 With her big Wedding Day down the pipe, Perry told us that she will mark the occasion specially with a well-executed Plan and Dress, as she believes truly that this will happen only once in her life, so she must make the best of it.  She also joked about her playfully seductive image claiming that she went with wearing Fruits for her debut album One of the Boys, while this time around on follow-up Teenage Dream, she is going with the theme of wearing Sweets (as seen on her California Gurls video).  Next time around she said she will wear a Bacon Dress, which drew laughter from the audience.  "Showing a little of my back is no more harmless than a photo of Miley Cyrus baring her back!", she reminded Mulroney who eluded to her not wearing enough clothing in her new video.
She stayed generously 30 minutes after the taping to meet and greet every single audience member who wished to get one on one time with her.  And living just minutes from her Hotel, I dropped by to say "hi" again and request a re-take of our Photo (since our first one didn't turn out), to which she told me to meet her back in a couple hours... and Perry kept her promise, indeed!  She went off to a Listening Party for her new album, returning famished telling me she hadn't yet had Dinner.  By then though, hoards of fans came by to get photos with Perry and she controlled the situation beautifully before heading back up to her Hotel Room.   She was especially sweet to three young girls,  chatting genuinely with them about the Tooth Fairy and signing their T-shirts one by one.  Perry mentioned to me  specifically that she remembered to come back for me, migrating over to me and doing a more than wonderful re-take of our photo together.  Amazing.
Please check back as I'll be bringing much more Perry coverage over the next few days!  In the meantime, enjoy these gorgeous photos of her looking like perfection. 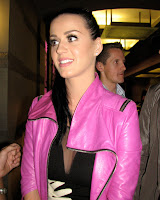 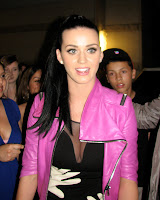 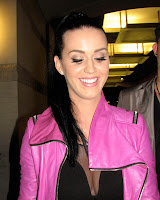 And guess what? Perry signed a few photos for Mr. Will-W.:Pop Maven readers because I know how much you guys love her!  If you want one, comment below with the title of your favourite Katy Perry track.  Three - yes THREE - winners will be drawn worldwide on July 7, 2010.  I will be working with EMI Music Canada to contest a copy or two of Teenage Dream

when it finally gets released August 24, 2010.  More details to come on that. One entry per person please.
Katy, if you're reading and I know you probably are - from the bottom of my heart, thank you.  You are everything I thought you would be and I meant it when I told you "I loved you!" a gazillion times.  See you Tuesday at Live at Much!  Can't wait to hear your new tracks.  xo
(Photo credit: Mr. Will-W.)
Posted by MR. WILL-W.:POP MAVEN at 3:09 AM