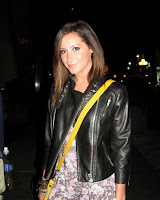 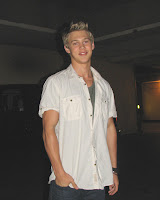 This one's for my younger readers!  Check out these great shots I got of High School Musical's Ashley Tisdale and Austin Butler earlier this evening.  Both are in town filming new Disney film Sharpay's Fabulous Adventure and had a quiet dinner at One Restaurant, featured here previously.  They headed off to Celebrity Ice Cream Haunt Summer's up the road before returning to their Hotel for some rest.

Tisdale in all honesty gives off an air of stand-offishness in-person, although alas offering to pose  Co-star Butler however, is more than happy to be photographed with an open arms policy.  When wishing her well and telling her I'd be seeing her again at Perez Hilton's party Sunday night, she brushed me off totally.  Just being honest.  But, thanks anyway!
(Photo credit: Mr. Will-W.)
Posted by MR. WILL-W.:POP MAVEN at 3:06 AM