VICTOR GARBER IN TORONTO FOR "TITANIC 3-D" ON DVD 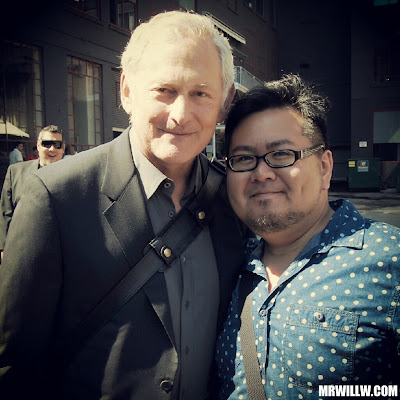 Our v. own Victor Garber is in-town currently to promote Paramount Pictures' Titanic 3-D on DVD and after arriving over the weekend, he continued a second day of Press today which saw him visiting Bell Media for an appearance on CTV's The Marilyn Denis Show.  Yesterday the London, Ontario-born Actor appeared on CityTV's Breakfast Television.

After catching his attention following his appearance earlier, he flagged me over for a quick Snap.  A real Gentleman and every bit as classy as I thought he'd be.
In addition to this visit, Garber - who has appeared in a litany of Hit Films and Television Series, including Alias, You Again, The First Wives Club, Legally Blonde and Sleepless in Seattle - will be returning again shortly for TIFF 2012, as he stars in Warner Bros.' Argo, directed by and starring Ben Affleck.  "I'm heading back home today and will be back again next week!", he says.  On Argo, he tells me, "You're going to love it. It's an excellent Film.".
Titantic is available on Blu-ray and DVD on September 10, 2012. Pre-order here.
(Photo credit: Mr. Will-W.)
Posted by MR. WILL-W.:POP MAVEN at 3:02 PM