After doing the rounds at Sundance Film Festival this past January where it was well-received, Sex Comedy For a Good Time, Call... now is ready for its release. Toronto-born Director Jamie Travis, Actress/Producer Ari Graynor and Co-Writers Katie Naylon and Lauren Ann Miller (the latter who also stars in the Film) arrived in Toronto late Wednesday to promote what has been a labour of love for the Quartet.

For a Good Time, Call... centers around Frenemies, Katie (Graynor) and Lauren (Miller), both brought together by financial necessity in order to afford their super-fab Apartment in Gramercy Park, following the death of Katie's Grandmother.  The Duo soon find themselves starting their own Sex Line to make ends meet and under the most unlikely of circumstances, they find themselves forming an unbreakable bond.

What many might not realize about this Story, co-penned by both Miller and Naylon, is that it actually is semi-autobiographical and yes, the latter admits to having worked prior as a Phone Sex Operator. "When you have a friend with you who is as funny and creative as Katie, it's easier. We actually cheated because we started with characters inspired by ourselves and we made a story with characters based loosely on our own archetypes. I don't know if it's officially cheating, but it certainly made things easier.".

Both Miller and Naylon give me the Backstory on their Friendship, which was sparked by a random pairing as Roommates in an off-campus Apartment during their College days at Florida State University.  Naylon admits laughingly, "Lauren didn't judge me as much as I judged her. She was quirky and sure had a lot of requirements - including a clear shower curtain and a sound machine at bedtime".  Miller went-off eventually to Los Angeles, while Naylon headed to New York City to work as a Copywriter. After much convincing and years of mailed Holiday Cards, both of them reunited in Los Angeles.  "We got settled in for a couple weeks, sat in front of a computer and wrote this", says Miller. "Honestly, I feel this is our destiny. It's some kind of magic", adds Naylon.

In addition to a hilarious and flamboyant turn from Justin Long, For a Good Time, Call.. is chalk full of Cameos including appearances by Seth Rogen (Miller's Husband), Kevin Smith, plus two Toronto talents in Nia Vardalos and Sugar Lyn Beard (formerly a DJ on KISS 92.5).  "We wrote lovers letters to all these talented people to get them to play with us", says Miller.  "Making an Independent Movie is about dreaming big and not taking 'no' for an answer.  We kept pushing and pushing and got really lucky.". 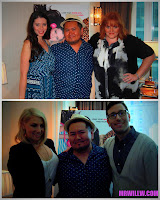 Shot over the course of 16 days with strict budgetary restrictions, both Miller and Naylon admit knowing little about first-time Feature Director, Travis.  They were however, sold on the fact that he was profiled in the New York Times and above this, he prior had directed Tegan & Sara Music Videos - yet another Canadian connection in all of this.  A telling sign that he has achieved success with this Film is that since word has spread about it, he's seen an improvement in the caliber of Scripts he's reading.  Travis says,  "I will never direct a Film just because it's got lots of money. I don't know how to direct a Film if I don't love what it is.".

At one turning point in the Film, we come to see a tough-talking Graynor deliver tenderness as the Film transitions from a Comedy to something much more heartfelt.  She tells me, "I think the reason why anyone becomes defensive is because they've been let down and it's too scary to live in that place.  That's why this personality develops contrary to that vulnerability. Katie doesn't have a lot of friends. She's afraid of being hurt, afraid of being herself; she's lived a very separate existence.  It's incredible - this Friendship she forms with Lauren - this Partnership she feels for the first time.".

On a parting note, I quiz Graynor about her obsession with Gay Social Networking Application, Grindr, as Tweeted by her recently. She laughs,  "Well, Grindr I only know about through my gay male friends. I still think it would be genius to have a Grindr for straight women seeking good-looking and manly straight men to cuddle with...  Cuddlr!". On her biggest Idol, she says, "I'm a massive Bette Midler fan and Big Business is my favourite Movie of all time.  One of the most glorious compliments I receive from those who have seen this Film is that I remind others of her. I hope one day to play her in a Biopic!", she suggests.  Perhaps that could be arranged with a Phone Call?


Hear Excerpts from my Chat below: