"It's strange not sitting in a Toyota Camry this time around", Actor-turned-Associate Director of the White House Office of Public Engagement, Kal Penn tells a room of Journalists. "Wait, did you just say Cam-er-ry in three syllables?", asks Co-star John Cho. "Well, I inserted it (the extra syllable) and we can't go back!", Penn snaps back quickly. Such is the playful banter and stuff of Chemistry which has made a hit out of the Duo's $64-million grossing Stoner-Comedy franchise, Harold & Kumar. The two Actors spoke to a few Journalists on their Toronto Press Tour for upcoming A Very Harold & Kumar 3D Christmas, directed by Todd Strauss-Schulson.

In this latest chapter, we see these two Buddies reuniting after having grown apart for a few years. Harold (Cho) has become a Family-focused Businessman, out to impress his intimidating Father-in-Law (Danny Trejo). Kumar is on the verge of being dumped by long-time Girlfriend Vanessa (Danneel Ackles) because of his underachieving ways, which often have him content at home on his couch smoking Pot. With the sudden arrival of a mysterious package at his door over the Holidays addressed to none other than Harold, Kumar is forced to get off his couch and reunite with his long-absent Friend again. One minor thing though. Accidentally, Kumar sets the treasured Christmas Tree on-fire. The same Tree which Harold was given the mandate to decorate. Together, old Friends Harold & Kumar and new - Adrian (Amir Blumenfeld) and Todd (Thomas Lennon) - go on a wild chase to find a replacement a Tree on Christmas Eve, proving ultimately that Harold is a competent Son-in-Law. Easy, right?
Many are questioning just how far the Harold & Kumar franchise really can go and also, why the necessity of yet another release? "So much has happened in six years for us" recalls Penn, "John's gone-on to star in Star Trek and I've worked at the White House. Neil Patrick Harris even has come out of the closet as a Gay Man.". "We were forced by real life to age our Characters too. The stakes are much higher now for Harold & Kumar.". "There's so much full-frontal male nudity in Films nowadays that it eventually will become de rigueur", says Cho on some of the more eyebrow-raising 3D moments in the Film. Penn adds jokingly, "Yes, next time we'll take you right inside and just show you internal organs!".
Although it might seem an odd fit to have made this into a Christmas story, Cho explains "We did once think about going the direction of a full-length Harold & Kumar go to Amsterdam, but one - that was too expected. Secondly, Movies set in Europe don't tend to do as well in the U.S.". Hence the decision to take an educated risk and go the route of a Christmas-themed Film. "Above this, there were contracts and lawyers involved, so we had to sign-on!", he laughs.
Many wonder just how similar the Actors who play Harold & Kumar actually are to their real selves. Penn admits that he is drawn to the role of Pot-addicted Kumar saying, "I like this Character because he's so different from myself. It's a treat to play him.". Cho feels that Harold is a good escape from some of his more serious roles like his gig on now-defunct series FlashForward, stating "It's a good way to spend a day. It's like Summer Camp... but not really!", he laughs.
I commented to Penn & Cho on the necessity of ethnically unconventional Heroes in Cinema, recalling my own Youth when I for one didn't see many people who looked like me in Mainstream Media. Cho looked at me and exclaimed "Oh, an Asian!", drawing collective laughter from all. "I'd say for me growing-up, it was Star Trek's George Takei who was my unconventional Hero. It was a big deal for me seeing him on TV. My whole Family would crowd around the TV set.". Who would guess one day that he too would be playing that same role originated by Takei, Hikaru Sulu, in 2009's Blockbuster Star Trek?
Penn would agree also that being of Indian heritage he too had a lack of Role Models whom he could related to being raised in New Jersey. "Apu from The Simpsons really didn't do anything for me but I'd say subconsciously that Kermit the Frog was an unconventional Hero for me", he says with a straight face. "Kermit was a true Underdog and I really identified with that". As an aside, Readers and Penn too might be excited that I'm scheduled soon for a bit of face time with the legendary Muppet himself!
A Very Harold & Kumar 3D Christmas - beyond the lewd Humour (Neil Patrick Harris will shock you), Drugs (consumed intentionally or not) and in-your-face gross-outs - is a Story of Friendship which truly stands the rigours of time, separation ...and prison. Cho admits openly, "I think my involvement with Harold & Kumar definitely closed a few doors in my Career, but it opened many also.". Penn states proudly, "It's flattering to know that both Harold & Kumar have touched so many people. I certainly wouldn't be opposed to making another Film.".
For now though, we have till Friday, November 4, 2011 to see what antics this Duo get themselves into when Warner Bros. Canada releases A Very Harold & Kumar 3D Christmas nationwide. You'll be impressed by their High-Kicks!
To enter and win A Very Harold & Kumar 3D Christmas Prize Pack - which includes an inflatable Christmas Tree with Ornaments - click "like" under this Post at Mr. Will-W.:Pop Maven on Facebook. You have til December 1, 2011 to qualify. Contest open to Canadian Readers only. Make this a green Christmas. Good luck, Mavenati! 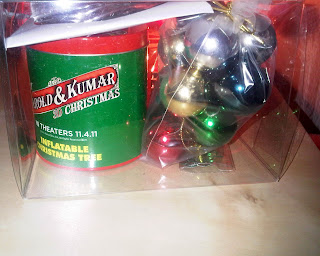