Our v. own Hayden Christensen came out to promote his new thriller Vanishing on 7th Street from Director Brad Anderson.  The film is about a massive Blackout which causes people to start disappearing in the city and premiered at Ryerson Theatre last night. Upon arriving the Press Conference for the film, the handsome actor told Fans-in-waiting that he'd come out to greet them after.  He could also be seen slowly nursing a Tall-sized Coffee from Starbucks during breaks and finally came out after finishing work to take a generous round of photos and do autographs for everybody.  Although I did get an invite to his party Saturday at Ultra Supper Club, I had other engagements so it was wonderful meeting him today.

Christensen wasn't the only big star to show up though.  Thandie Newton arrived shortly after him and despite her PR telling everyone she won't be able to greet Fans, she went against his wishes and did it anyway.  Bad Girl.  Newton generously took photos and did autographs for anyone who asked; absolutely delightful and I love her even more now!
Check out more pics below: 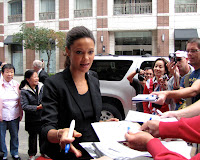 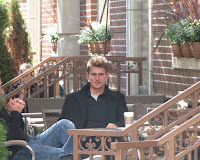